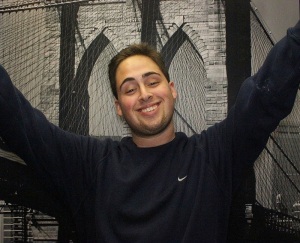 Me in the photo booth at The Barclay’s Center

On Friday, November 23rd, I entered the Barclay’s Center for the first time to watch the Brooklyn Nets take on the Los Angeles Clippers. Of course I was excited to check out the game, but I was more excited to see the architecture of the building, because prior to music, that was my passion. The $1 billion dollar arena is filled with bright lights, enormous LCD screens, and nostalgic Brooklyn eateries. As I continued to walk around the facility, I kept saying to my brother, “This place is very hip-hop.” Could this be because of minority owner Jay-Z or is it because of todays culture? The answer is both. Located on the corner of Atlantic Ave. and Flatbush Ave., I saw many people walk into the arena with Nets snap backs by Adidas, ‘So NY’ fitted hats – (a phrase coined by Brooklyn rapper Fabolous), and the very popular, limited edition 40oz NY Givenchy inspired snap back. Overall, it was incredible to see firsthand the dominance of hip-hop and how it is one of the primary sources of marketing in 2012. 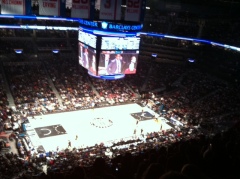 That by the songs end I’ll probably start another trend”

Jay-Z has managed to take an entire culture and make it the driving force behind a new team, brand, and economy. Sitting next to the Brooklyn Nets bench along with Beyoncè & Kelly Rowland, you could tell how proud Jay-Z is that he can now, “park at his own arena” (Jay-Z, “3 Kings”). After all, his music and various other entities are incorporated throughout the entire facility.

“He is [the face of the team], He is us. He is how people are going to see that place.” 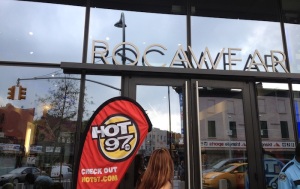 RocaWear store at The Barclay’s Center

On the corner of Atlantic Ave., right next to the official Brooklyn Nets team store, you can find RocaWear, Jay-Z’s urban apparel that at one time grossed over $700 million in sales. Although Jay-Z sold the rights to the Rocawear brand in 2007 to Iconix Brand Group for $204 million, he still retains stake in the company and continues to oversee the marketing, licensing, and product development.

Overlooking the court, you can find Jay-Z’s 40/40 Club & Restaurant. The club has created an element that gives spectators the ability to party and watch the game at the same time. Although it is too early to project the success of the club, the original 40/40 Club located in lower Manhattan is expected to generate a $10 million per year profit*.

Every dribble of the basketball is complimented with a beat. Whether it’s warming up to French Montana’s “Pop That” or hustling down the court to a Jay-Z instrumental, the Barclay’s Center is constantly making sure you’re on your feet cheering. Additionally, each halftime show features a performance by a known artist (so far R&B singer Mario & Slick Rick have performed).

To open the Barclay’s Center, Jay-Z performed a series of 8 concerts at affordable prices (*an average Jay-Z ticket is usually $119 per show) to 18,000 fans per night.

Jay-Z Performing at The Barclay’s Center

According to Forbes Magazine, Jay-Z’s shows generated an estimated $15 million, leaving a cool $5 million for Jay-Z himself.

“The fourth largest, first hardest, Brooklyn is the place /

Settled by the Dutch many years ago /

The purpose of this post is not to show off Jay-Z’s entities or financial success. We all know what he has and what he’s capable of creating and doing. Many artists are one-dimensional these days and fail to see the opportunities that corporate America can provide. Clearly, consumers and major company executives trust the youth and their culture to place large budgets on projects they see future profit in. Hip-hop isn’t about being misogynistic, a gangster, or drug dealer/user; those are personal choices. It’s about incorporating a passion for music and expanding it to a broader audience that will allow you to reach personal and professional success. Jay-Z has a loyal fan base, New York City enjoys basketball, and Brooklyn residents love their borough; it’s a match made in heaven. I hope that every artist can see the bigger picture and take their careers to the next level. I also encourage everyone to visit the Barclay’s Center if they have the opportunity!