On October 4th, Mike Stud brought the Stud Nation Tour to Ithaca, NY. I had a chance to sit down with the All-American baseball player turned rapper after the show to talk about The Stud Nation tour, his musical journey, education, and more.

First, I want to congratulate you. Last month you sold out the Highline Ballroom in NYC. As a relatively new, independent artist, what was your reaction to the show?

It’s crazy. Like I said on stage, I really appreciate it. I don’t take anything for granted. My agents thought we could do it, but I didn’t know we sold it out 10 days ahead of time, which is nuts. A huge thank you to everyone who came, it’s dope.

You’re currently on the Stud Nation Tour. What’s the concept of the tour and what are you hoping to accomplish out on the road? 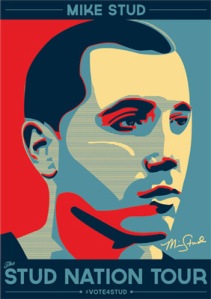 The concept is something my manager came up with. The Stud Nation thing is kind of a play on the presidential theme; you see the portrait, it looks like a president portrait. They’re just trying to play off my background. I went to some very uppity schools [Duke University & Georgetown University] and that I’m more for the Middle American kids. I make music for the people who relate to me and that’s Middle America, so we thought Stud Nation would be a cool theme.

You, along with your good friend Huey Mack, and a few others, are ultimately the ambassadors of the “college hip-hop” movement; I think a lot of kids out there tonight saw a little bit of themselves in you. With that being said, how do plan to grow and remain at the forefront?

I’m not exactly sure what the whole “college music” thing is. I just think kids in college like my music. If you listen, most of my records, especially the newest ones, are not about partying or college. Sure, the one that popped off was “College Humor” and that’s fine, but I think people that really take a listen and write off the superstitions behind it will see a real artist. You’re going to start to hear more singing in my new songs and more of an artist feel, and not just a “frat boy.” I was never a frat boy; I’m a white kid that played baseball.

Something I notice about you is that you aren’t afraid to collaborate with other aspiring artists. What’s your rationale behind that? Do you think it will lead to any criticism?

Huey and I are splitting images. A lot of time we’re in the same city and we just meet up, we made the mixtape [Click] on a limb.

My favorite one is “You Don’t Know Me” with Tarik…

He’s the homie. He’s dope. I did that shit because he deserves more fans. Everyone on my business side said that it didn’t make sense to do that collaboration with him because he has a much smaller fan base, but he’s dope and very humble.

One of the things about you that I want to understand a little better is your social media presence. As we know, your baseball injury led you to music, but anybody can do that. Like you said on stage, it’s only been 14 months since you released your first mixtape. How did you know who to target and make the Mike Stud brand an Internet sensation?

Honestly, I have no idea. I made “College Humor” for baseball parties at Georgetown. My teammates kept saying, “Yo! I like your music, keep making songs.” I made the song on Garageband; I had no engineer. I just recorded it in my dorm room, drunk. The fact that everywhere I go that’s the song everybody knows, it’s crazy.

So it was just word of mouth? 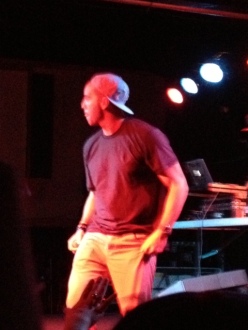 Mike Stud at The Haunt in Ithaca
Photo by Nick DeJohn

Now you have Jon Kilmer on tour with you. Every kid wants him to direct their video, you have your sponsorship with Freshletes, and your music steadily brings traffic to all the blog sites.

It came out of nowhere; I can’t thank the people enough.

I read that you went to Georgetown University graduate school to study sports management and finance. How has your educated helped you in the music industry so far?

I’m just way more involved than people understand. Most artists don’t even care about the business side. I’m in on every meeting, the behind the scenes stuff at this point is pretty crazy, and so I’m very involved. That’s how I like it.

With booking powerhouse Peter Schwartz and The Agency Group behind you, I’m sure many opportunities that are starting to present themselves. What’s next for you and what are you hoping to accomplish in the near future?

As much as Peter and those guys are going to take their expertise and grow my brand, it’s still about the music. I’m not big enough to just go do tours. I’m one mixtape in; I haven’t done shit. I know that, and I don’t think I’ve made it at all. We’re working everyday; there are no days off. At this point, I’m just working harder because my foot is in the door.

Peter is great, and I’m blessed to have a lot of great industry people behind me right now, most who we haven’t mentioned to the public yet. I’m going to use those tools, but right now it’s all driven by the music. 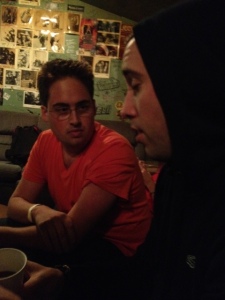 1 thought on “How An All-American Baseball Player Became A Successful Rapper: An Interview With Mike Stud”